Tiger Woods blames the wind at 17: ‘I hit a good shot’

PONTE VEDRA BEACH, Fla. – When Paul Tesori was 9 years old his grandfather had him tag along for a visit to TPC Sawgrass.

It was 1980 and the Stadium Course, which today gleams with acres of green, was still being converted from a swamp. But young Paul couldn’t resist taking a few cuts off the dirt into what would become the most iconic par 3 in the game.

As he stood on that same patch of ground nearly four decades later, those memories came flooding back. All of those trips to the Stadium Course with his grandfather, who would spend his twilight years working as a starter across the street at the Ponte Vedra Inn & Club.

His mind raced to all the times he’d stood outside the ropes during The Players trying to catch a glimpse of his heroes at the Tour’s flagship event. To the countless hours spent on the far side of the range when he worked for the game’s ultimate perfectionist, Vijay Singh. Even to the two times he made par on the island-green 17th hole after finding the lake with his tee shot.

“When we were on the run Friday [when his boss, Webb Simpson, shot 63], I was having the thoughts about my grandfather; about ’77 at Sawgrass [Country Club], watching Mark Hayes winning – that was the first time I stepped on a course; hitting the 5-iron and 7-iron [in 1980], it was still dirt,” remembered Tesori, who went to work for Simpson in 2011.

Full-field scores from the The Players Championship

It’s the players who hit the shots and either endure the consequences or savor the success. Tesori would never allow himself to be lulled into thinking any differently, but for the 46-year-old who grew up in St. Augustine, Fla., and now lives 15 minutes from TPC Sawgrass, Simpson’s four-stroke victory on Sunday stirred emotions that stretched back decades.

“This means more to him, no offense, than the U.S. Open,” said Tesori’s wife, Michelle. “This is where golf became life for him with his grandfather, with his dad, this is home. Webb calls him the mayor – he can’t walk anywhere here without somebody calling to him from outside the ropes.”

It was no different on Sunday as Simpson set out with a seven-stroke lead. The crowds were comparatively thin, which was not so much an indictment against Simpson so much as it was a testament to Tiger Woods’ renewed draw, with the guy in red and black four groups ahead. But those who did spend the day with the front-runner were largely from Tesori’s world.

His sisters were there, along with an assortment of neighbors and a group of friends Tesori has known since elementary school. All total, Michelle Tesori figured she doled out at least 50 tickets.

“Let’s go, Paul,” a fan yelled as Simpson teed off.

It was a common theme throughout the day. Although Simpson has proven himself a world-class player, having won four times on the PGA Tour, including the 2012 U.S. Open, it was Ponte Vedra’s “mayor,” Tesori, who was cheered.

“I had more people yelling my name out there. I told Webb, ‘Man, this is embarrassing,’” Tesori said with a laugh, following Simpson’s final-round 73.

Tesori estimated he’s played the Stadium Course over 700 times, primarily during his 5 ½ years as Singh’s caddie. Those were hard years. He made a ton of money and worked even longer hours, explaining that one year while he was caddying for the Fijian he had a grand total of five days off the clock.

“We built a house down there [on the Sawgrass range],” Tesori joked.

It was hard to leave Singh, but Tesori knew it was best for his family, and when Simpson called it was an easy decision. The duo was drawn together by their deep faith and their dedication to family, but they stayed together because Simpson realized Tesori was exactly what he needed. 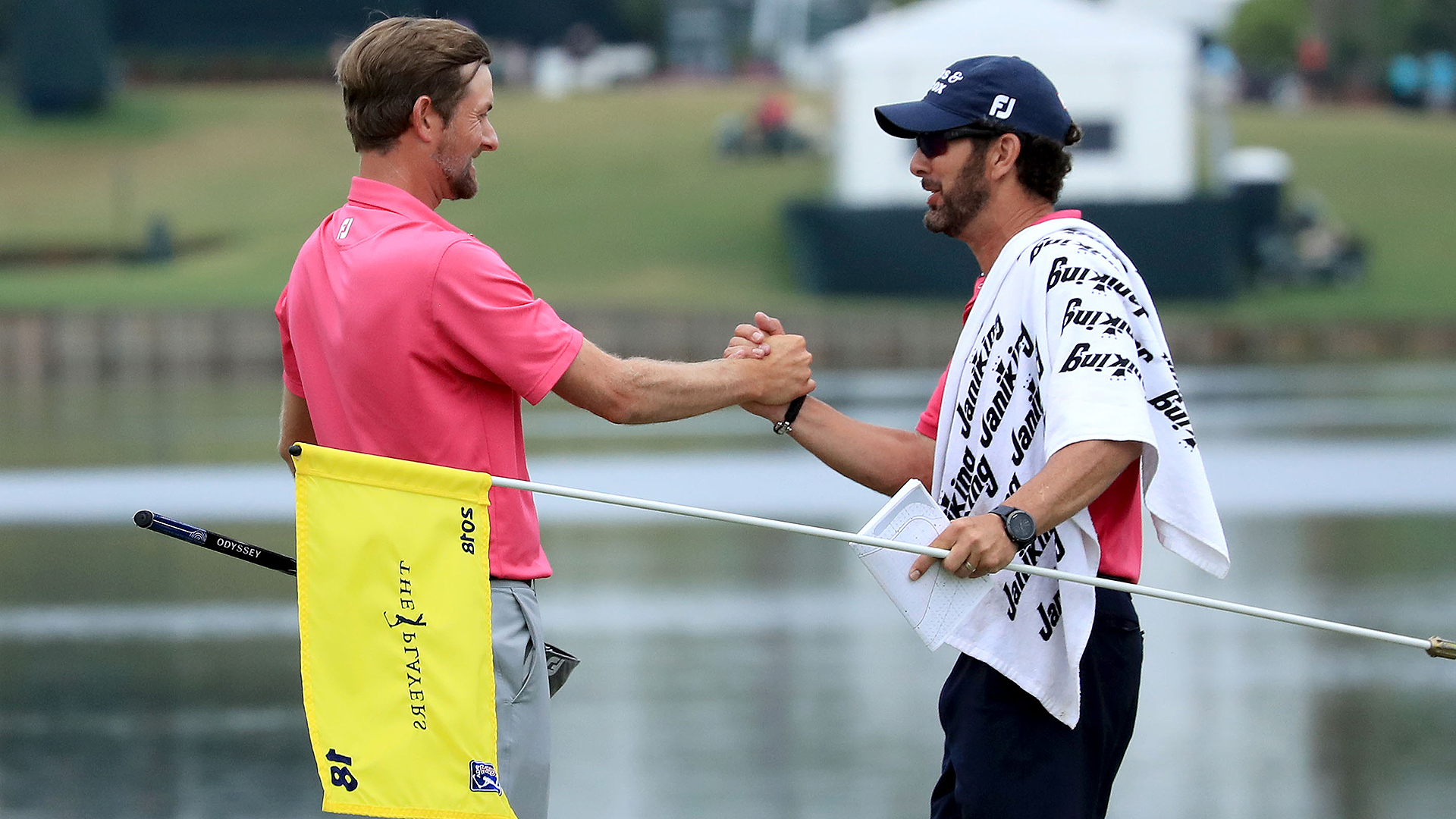 “To work with somebody every day for eight hours, nine hours a day, and you really like them, and you have a friendship outside of golf, I think it’s pretty special,” Simpson said. “I get lonely because my family is at home, and there’s ups and downs of the year for performance. As a friend, he knows me better than just a coworker, so he knows how to handle me if I’m in those bad places.”

There is no Hall of Fame for caddies, but if there were Tesori would be a first-ballot addition. Sunday’s victory at The Players was the 20th of his career as a caddie and it’s impossible not to notice how he makes an impact in the most subtle ways.

On Friday, Simpson was on a torrid run having birdied six consecutive holes, starting at No. 11, and looked as if he were going to shatter the course record. But he was unsure on the 17th tee. Tesori knew he was between clubs with an unpredictable wind swirling, so he stepped in with the bag, which is the unspoken sign that Simpson needed to rethink his choice.

Simpson bounced his tee shot off the bulkhead and into the same pond Tesori had deposited sleeves of golf balls into as a 9 year old. But the moment still stood as a testament to his ability as a caddie.

He made a similar move on Sunday as Simpson walked off the 12th green. “I asked him, ‘Hey, bud, you OK?” Tesori said. “He was missing his line by too much and just needed to settle down.”

As Simpson made his way around the front nine with a host of would-be champions closing in from all sides, including Woods, who moved to within four strokes at one point, Michelle Tesori offered an easy smile to navigate the tension.

“His heart is just different now than it was in the Vijay years,” she said. “Webb is so incredible and they are so transparent about their faith and how much more important that is than golf.”

Tesori’s faith would have remained steadfast and his dedication to his family unchanged regardless of Sunday’s outcome, but after more than 700 trips around the Stadium Course he had no problem admitting that none were as sweet as Sunday’s stroll.